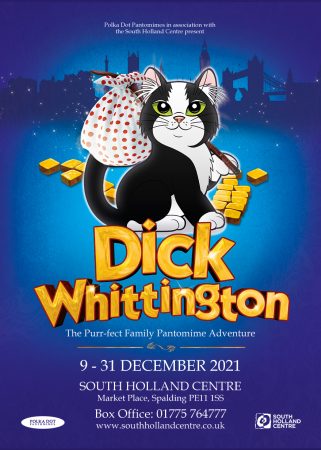 Following 2019’s record breaking production of Rapunzel the South Holland Centre have once again teamed up with Polka Dot Pantomimes to present South Holland’s next spectacular festive show! This year’s purr-fect pantomime DICK WHITTINGTON tells the rags to riches tale of a young man and his cat on an exciting quest for fame and fortune as he dreams of becoming Lord Mayor of London. Audiences can expect the usual mix of crazy characters, awesome adventure, singing, dancing, villainous baddies and heroic goodies with a little bit of feline flavour thrown in for good measure! Featuring a fantastic cast with some familiar faces, DICK WHITTINGTON is guaranteed to be full of wonder and excitement that will delight audience of all ages. So don’t “paws” too long to book your tickets with the great Early Bird Deal making it once again the best value panto in Lincolnshire.